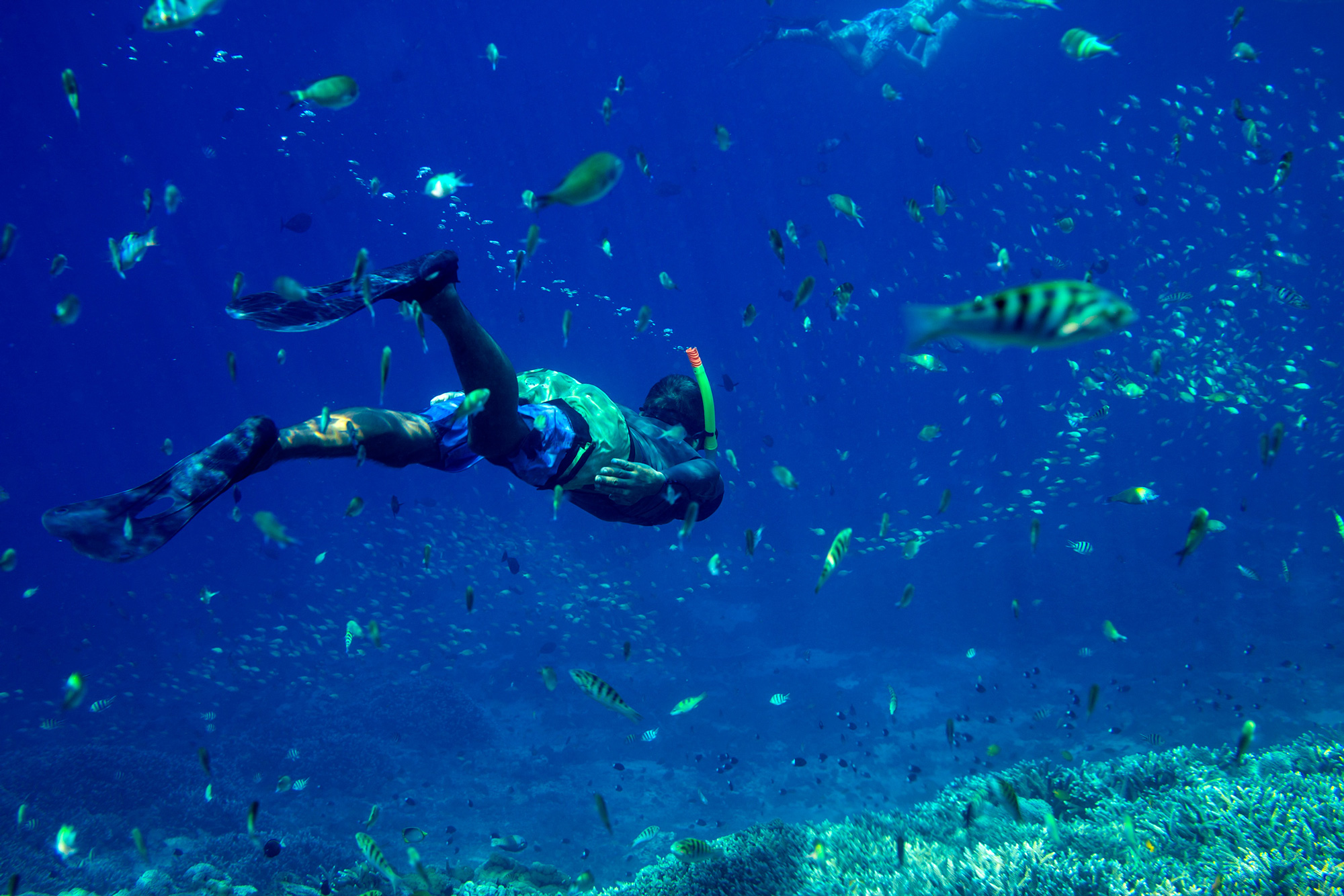 When talking about Madeira Island, it’s not just about imagining a full and appealing programme of events that invites you to visit all year round. There are other good reasons to include Madeira as an option in your next holiday destination. Gastronomy being also a key point, we must also underline that Madeira Island is rich in activities, including sea activities. Diving and snorkeling in Madeira means discovering a fascinating underwater universe, which can provide unforgettable experiences.

Madeira Island is one of Europe’s most privileged places for diving. The different depths of the diving spots, the crystal clear waters along Madeira’s coast and temperatures that vary between 18º C and 24º C, make this activity attractive and inviting, as it can be practiced all year round. Madeira’s temperate, crystalline waters allow for incredible scenery and close contact with species such as anemones, black coral, nero fish, moray eels, manta rays and sea lions (the rarest seals in the world!).

The great advantage of snorkeling or scuba diving in Madeira Island, for beginners and experts alike, is that you don’t have to travel long distances to find snorkelling or diving spots.

Take note of the most spectacular places in Madeira where you can dive directly from the beach and venture out on your next visit to the pearl of the Atlantic.

Is one of the most sought after places as it has 7 diving spots and some diving centres. In fact, there are 7km of coastline, from Lazareto to Ponta da Oliveira (“Lazareto”, “Pináculo”, “T-Reef”, “Praia do Garajau”, “Baía dos Porcos”, “Arena” and “Galo”).  Considered one of its ex-libris, the Garajau Nature Reserve offers an extremely rich and powerful marine diversity. In this area, species such as barracudas, moray eels, char may be observed, Indian mackerel, salemas, lilies, anemones and giant groupers or rays.

Garajau Beach, a protected area accessible by cable car, car or foot, is one of the most popular places for diving enthusiasts and underwater photographers as it has a graceful depth, abysses over 30 metres deep, caves that are home to sea lions and the exclusive specimens of this area, the giant grouper that can weigh up to 65kg. This docile species has been tamed by divers since the 1980s, and they have become the so-called “diving partners” of those who visit the area. It is also possible to come into contact with other marine species in this protected area, such as the shoals of salemas, barracudas, lilies and giant anemones.

Next door, in Caniço, Galo and Reis Magos, the attraction is the rays. In this area, you can try various types of low-difficulty dives accessible from different points on the beach. You will find some underwater sites such as the “Cave”, the “Lava Finger” and the “Arena”. Focusing more on the “Reis Magos” area, you will find mostly tiny living creatures such as seahorses and frogfish. Night dives are very popular and offer a new perspective of the seabed, with active algae and “sleeping fish”.

It is at Cais do Sardinha, with access via the pedestrian route from Ponta de São Lourenço (in Caniçal) or by sea, that there is not only a vast geological wealth but also a whole underwater charm to explore with species ranging from octopuses to barracudas and black corals.

In Madalena do Mar you can find between 21 and 30 metres deep, 180 metres off the coast, the “Bowbelle”, a sunken ship that is now an artificial reef.

There are various diving schools and companies in Madeira specializing in excursions, diving baptisms and equipment rental with the best conditions for great underwater adventures.